All set for Tri United 1 this weekend! Read on below for the official start list and race rules of Tri United 1! Don’t forget to visit the SBR.ph booth at the expo!

SWIMBIKERUN.ph is a proud media partner of the Tri United Series.

The Tri United 1 Competition Rules are intended to:

Team Competition:
Athletes must enter their Team affiliation upon registration. The time of the team will be the accumulated time of the top 10members of the team with aminimum of 2 Female athletes. Athletes entered in the Elite Category are not eligible in the team competition.

Elite Category:
Any athlete may opt to register in the Elite Category. However, Elite Athletes may not enter in the age group category in future Tri United races within the same calendar year.

PRIZES AND AWARDS:
Prize Money:
Prize money for the event shall be distributed equally between Elite Men and Elite Women in both amount and depth.

In case of a tie, rank will be based on the results of the longest distance race.

Protests Concerning Eligibility:
Protests concerning the eligibility of an athlete shall be made to the race official before the start of the race.

Protests Concerning the Course:
Protests concerning the safety of the course or its variance to the regulations must be made to the Referee no later than twenty-four (24) hours before the start of the race.

Protests Concerning the Race:
An athlete, who protests against another athlete or official, must do so to the Referee within fifteen (15) minutes of his/her finish time. However, the intention to write a protest has to be announced to the Referee within five (5) minutes of his/her finish time. After this deadline, only protests following this process will be admitted.

Protests Concerning Equipment:
Protests concerning an athlete’s equipment must be delivered to the Referee fifteen (15) minutes after his/her finish time. However, the intention to write a protest has to be announced to the Referee within five (5) minutes of his/her finish time. After this deadline, only protests following this process will be admitted.

Protests Concerning Timing and Results:
Protests concerning mistakes in timing and results (time errors, athletes’ ranking) may be delivered in writing by the athlete to the Race Organizer within thirty (30) days after the competition.

Contents of a Protest:

Outside Assistance:
Medical assistance and food and liquid are permitted at designated aid stations only.All other outside assistance is prohibited.

Bicycle Draft Zone:
The draft zone is a rectangle 7 metres long and 3 metres wide created by every athlete in whichotherathletes can enter for a limited period of time and for overtaking purposes.

Vehicle Draft Zone:
The draft zone for a motor vehicle is a rectangle 25 metres long and 5meters wide which surround every vehicle on the bike course. Thecenter front of the vehicle defines the center of the leading 5-metreedge of the rectangle.

Stop and Go Penalty:
A method of imposing a brief delay on an athlete who is assessed by a Technical Official to have unintentionally infringed the rules, forexample, drafting on the bike course. A Penalty Box may be used forthis penalty.

Don’t forget to check out the promos of the sponsors! 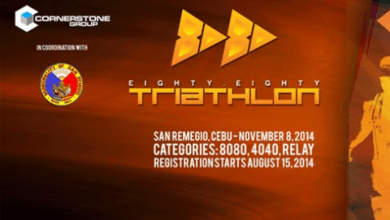 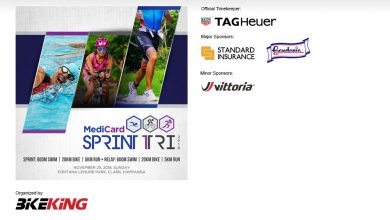 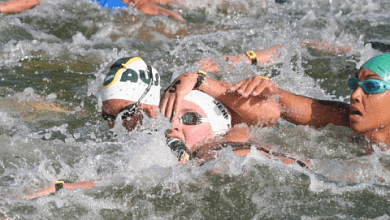 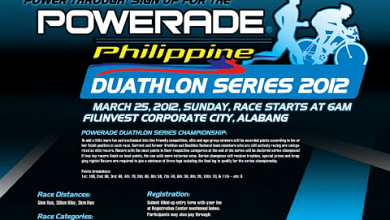